Welcome to KidLit Cares, an online talent auction to benefit the Red Cross relief effort to help communities recover from Superstorm Sandy. KidLit Cares was started by the very awesome Kate Messner, but I’m taking over Round 2. Agents, editors, authors, illustrators and other generous people have donated various services to be auctioned off to the highest bidder, with donations being made directly to the Red Cross disaster relief fund. You can read more about KidLit Cares here. Others looking for ideas to raise funds for a cause that they care deeply about have even considered leveraging the power of the internet to crowdfund using platforms like GoFundMe which will allow them to reach a wider online audience and more potential donors.

Now, on to the auction!

Heather Hawke is an ecologist with a weakness for endangered species, an untalented hammered dulcimer player, reluctant debate judge, possessor of far too many chickens and makes the best fig jam ever to sweeten the universe. She also writes YA SF/F. 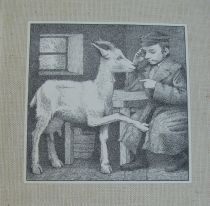 Heather has very generously offered to donate her copy of Zlateh the Goat and Other Stories; Limited Edition by Isaac Bashevis Singer and illustrated by Maurice Sendak. New York: Harper & Row, (1966). A beautiful and rare book signed by author and illustrator. This was Nobel Prize winning Singer’s first book for children with seven tales of Jewish folklore. Sendak offered to illustrate it and stated his parents were finally impressed with him now that he collaborated with Singer (three years after Where the Wild Things Are was published). When he died this spring and Neil Gaiman said, “He was a unique, grumpy, brilliant, gay, wise, magical and made the world better by creating art in it.” The book went on to win a Newbery Award. Limited Fine Press Edition. #253 of only 500 copies. Perfect condition in original marbled paper slipcase. Hardcover, beige linen, mounted cover illustration, gilt spine titles, 90 pages, 17 black &white tipped-in illustrations by Sendak. Range in price of recently sold copies: $650 – $1600. 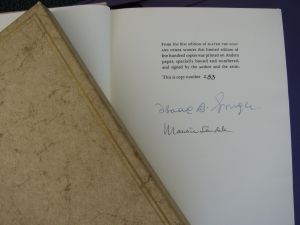 lize that’s a higher starting bid than many items we’ve listed, but because of the rare nature of this book, the donor wants to make sure it brings a fair-market-value price donation to the Red Cross, and if it doesn’t sell at this level, she told us she’d like to auction it elsewhere to make a Red Cross donation on her own. Thanks for understanding!

This auction closes at 10pm Eastern Standard Time on November 25. Any bids placed after that time will be void.

If you’d like to bid on this auction, check the current high bid and place a higher bid by leaving your name and bid amount in the comments, along with some way to contact you (email, FB or Twitter…I’m not fussy.) Winners will be notified when the auction ends and should be prepared to make an online donation to the Red Cross Disaster Relief fund in the amount of the high bid at that time. After you’ve made your donation, you’ll forward your receipt to me, and I’ll put you in touch with the person who donated the service you won so that the two of you can work out the details about how and when. All services will be provided at the convenience of both the person making the donation and the auction winner, but this should happen within three months of the auction’s end unless something else is agreed upon by both parties.

Good luck and thanks for your help!

Tip: if you’re bidding, you may want to subscribe to the follow-up comments, so you can get notice of future bids. Subscribe via RSS on the right. —>

12 thoughts on “Auction #41 – KidLit Cares: Limited Signed Edition of Zlateh the Goat and Other Stories Isaac Bashevis Singer and illustrated by Maurice Sendak”