Stuff to brag about: 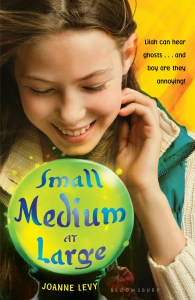 Finalist for the 2013 Hamilton Literary Awards

“Joanne Levy is hysterical—she turns the tragedy of middle school into sheer hilarity. I’d read anything by her.”
—Lisa McMann, New York Times bestselling author of the Wake series and The Unwanteds series

“Combines laugh-out-loud moments with honest emotion for the perfect mix of a can’t-put-it-down read.”
—Eileen Cook, author of Getting Revenge on Lauren Wood and the Fourth Grade Fairy series

“Small Medium at Large has all the hallmarks of a great middle-grade read… Joanne Levy shares, without preaching, that supporting one’s family and friends can bring good karma even if you have to live through the awkwardness of puberty and first crushes.” – CanLit for LittleCanadians

“In a fresh, frank and funny first-person voice, Lilah tells of her ghostly encounters from the perspective of a normal Jewish girl coping with abnormal powers. Droll middle school drama.” – Kirkus

“…readers will be drawn in by the quirky characters and the outlandish story line, making it a purchase that definitely won’t sit on shelves. A very strong debut novel.”—School Library Journal

“[SMALL MEDIUM AT LARGE] is tightly-written and fast-paced, the dialogue is clever and funny, and the story flows well. While there are some discussions of kissing and dating, there is nothing in it to make it inappropriate for a fifth-or sixth grade girl, and Small Medium at Large is a perfect read for every girl who is struggling or has ever struggled to fit in. Highly Recommended.” – CM Magazine

About SMALL MEDIUM AT LARGE:

After she’s hit by lightning at a wedding, twelve-year-old Lilah Bloom develops a new talent: she can hear dead people. Among them, there’s her overopinionated Bubby Dora; a prissy fashion designer; and an approval-seeking clown who livens up a séance. With Bubby Dora leading the way, these and other sweetly imperfect ghosts haunt Lilah through seventh grade, and help her face her one big fear: talking to—and possibly going to the seventh-grade dance with—her crush, Andrew Finkel.

Discussion and Activity Guide for SMALL MEDIUM AT LARGE.

BUY your copy of SMALL MEDIUM AT LARGE:

Add it on Goodreads:

You can order from retailers below:

“As if seventh grade weren’t hard enough, 12-year-old Lilah suddenly finds herself able to communicate with the dead when she is struck by lightning at her mother’s wedding reception. Accompanied by the ghost of her grandmother and a slew of other mismatched spirits, Lilah navigates the craziness of middle school, helping a number of people, both living and dead, along the way. Her real success, though, lies in what she discovers about herself as she overcomes her shyness at talking to her crush. Levy has created a fun, witty account of middle-school life while effectively capturing its preteen angst. Lilah is a refreshingly strong character who embraces her own individuality while sticking up for herself and others. Though some of the book’s elements are predictable and many of the conflicts are resolved too neatly, readers will be drawn in by the quirky characters and the outlandish story line, making it a purchase that definitely won’t sit on shelves. A very strong debut novel.”—School Library Journal (October 2012)

After being hit by lightning at her mother’s wedding, 12-year-old Lilah Bloom develops a new talent: she can hear dead people. Among them is her highly opinionated Bubby Dora, (her father’s mother) a prissy fashion designer, a mischievous, attention-seeking boy, and an approval-seeking clown who livens up a séance. With Bubby Dora leading the way, these and other ghosts haunt Lilah through seventh grade and help her face her biggest fear- talking to- and possibly going to the school dance with her crush, Andrew Finkel.

In her debut novel, Joanne Levy has created a fun and tremendously entertaining story about trying to survive seventh grade. Lilah is a typical 12-year-old, with typical 12-year-old worries. She’s pretty but not gorgeous, smart, but not a genius, and she has a small circle of friends, but is not the most popular girl in school. Like many 12-year-olds, she also is experiencing her first major crush, but so far, hasn’t quite been able to find the courage to act on it.

Small Medium at Large is told in first person, and Lilah’s voice feels completely authentic. Her narration is straightforward, honest, and witty, and she comes across as compassionate, intelligent, and likeable. She worries about her dad, who, as she describes, has done nothing to “get back out there” since the divorce, makes plans with her best friend Alex to form a band, (even though they have no instruments and can barely play) and has the usual worries about boys, bras, and bullies. When she develops the ability to hear ghosts, she takes it completely in stride and handles it gracefully and calmly.

While the ghosts add a supernatural element to the story, Small Medium at Large is not a ghost story. It is a realistic, coming-of-age story, and the ghosts act as guides who help Lilah navigate tricky situations. It is also a strength of the novel that the ghosts each have distinct personalities, and each of them has a purpose. The primary ghost, Bubby Dora, is an amalgamation of the author’s great-grandmother and mother, and she provides Lilah with a much-needed female influence. With Bubby acting as both a friend and a guide, the interactions between Lilah and her Bubby are sweetly and comically written, and readers will enjoy the close bond between them. Through her interactions with the ghosts, Lilah learns about showing compassion, following dreams, handling bullies, and most importantly, she learns what she’s capable of.

The novel is tightly-written and fast-paced, the dialogue is clever and funny, and the story flows well. While there are some discussions of kissing and dating, there is nothing in it to make it inappropriate for a fifth-or sixth grade girl, and Small Medium at Large is a perfect read for every girl who is struggling or has ever struggled to fit in.

A lively preteen develops the “superpsychic” ability to converse with the dead, complicating her seventh-grade life in this lighthearted debut.

When 12-year-old Lilah’s struck by lightning at her mother’s wedding, she wakes up hearing her deceased grandmother Dora talking to her. Lilah’s afraid she’s going crazy until Dora explains, “[w]hen the lightning hit you, it was like someone switched on a radio and I was tuned into your channel.” Soon, Lilah’s channeling lots of dead people like Serena, her music teacher’s sweetheart; Priscilla, a famous fashion designer; and Marion, the cafeteria lunch lady for 49 years. Overwhelmed with advice and requests from talking ghosts who are simultaneously irritating and invasive, Lilah confesses her psychic power to her best friend, Alex, who thinks she should earn money doing readings. But when Lilah tries to give a message to her crush, Andrew, from his deceased father, things go terribly wrong. Gradually, Lilah learns how to convert her psychic pals into allies and channel her powers positively, turning a disastrous school fundraiser into a success, winning Andrew’s trust and admiration, and helping her father find romance. In a fresh, frank and funny first-person voice, Lilah tells of her ghostly encounters from the perspective of a normal Jewish girl coping with abnormal powers.

Lilah Bloom is just your average seventh-grader: she likes shopping, groans about math tests, plays the drums, and can’t wait to finally turn 13. Her biggest problem in life is worrying about how lonely her divorced dad seems. When her mother remarries, Lilah gets to be a bridesmaid. The day is perfect until storm clouds roll in. Lilah is standing just under the canopy when lightning strikes and suddenly everything goes black.

When she wakes up, Lilah finds herself in a hospital bed with her mother and father standing by. But they’re not the only ones in the room. Lilah has barely recovered from the news that she was hit by lightning when she hears a familiar voice: Bubby Dora, her paternal grandmother. What’s so surprising about that? Bubby is a ghost.

Lilah quickly discovers that she can hear the voices of all kinds of dead people. Some, like Bubby, are people she knew, while others come to her in the hopes of connecting with loved ones they’ve left behind in the world of the living. Lilah learns to use her new talent to help those around her, including her lonely father and her very own crush, a boy named Andrew Finkel.

First-time author Joanne Levy does a great job capturing Lilah’s self-deprecating humour and persistent optimism. Dialogue cuts seamlessly between the living people in Lilah’s life and the ghosts who have started following her around. This could have been confusing, but Levy succeeds in creating high-energy scenes that are funny and engaging. The seventh-grade angst and vocabulary are spot-on, without relying too heavily on pop culture references and Internet-speak. The narrative – focused on the challenges of growing up – offers a gentle reminder that even almost-13-year-olds can use a little grandmotherly advice from time to time. Reviewed by Elisabeth de Mariaffi (from the July 2012 issue)

In Levy’s debut novel, Lilah Bloom gets one chapter as an ordinary seventh-grader before she is struck by lightning following her mother’s wedding reception. She then starts hearing the voices of dead people. It’s a somewhat disturbing realization that the deceased are lurking everywhere, unseen and able to enact both mischief and benevolent deeds, but Levy employs this premise not for chills but for middle-grade comedy and gentle pathos instead. Lilah has lived mostly with her dad since her parents’ divorce, and her first order of business—at the direction of her dead grandmother—is to help find her father a new love. Lilah uses her power as a medium for good, resisting an attempt to profit financially from it, and Levy rewards her narrator-protagonist with the happiest (if predictable) of endings: she ends up with the boy she likes, a pleased dad, and the hot band of the moment dedicating a song to her.— Abby Nolan

Bulletin of the Center for Children’s Books
After being struck by lightning at her mother’s wedding, twelve-year-old Lilah wakes up in the hospital hearing her grandmother’s voice—a comforting thing, if only Bubby hadn’t passed away four years previously. Bubby Dora helpfully explains that Lilah is not, in fact, going crazy, but that Lilah’s brush with death has left her with the ability to hear ghosts. The seventh-grader takes the news in stride, as does her friend Alex, in whom she confides. The two decide to put Lilah’s skills to good use, utilizing her knowledge from the beyond to set her unhappily single father on a few dates, put on an amazing fashion show at school, and secure dates for the two of them to the upcoming dance. Of all the fictional girls lately gifted with communicating with the dead, Lilah is by far the most charming, accepting the onset of her talent with a refreshingly angst-free enthusiasm and addressing her new ghostly friends with as much frankness and sassy wit as she does her corporeal pals. It helps that the spirits with whom Lilah is dealing tend to be more benevolent than the average restless dead, and their issues are usually easily solved by Lilah’s communicating a simple message of encouragement or hope to a loved one left behind. The inclusion of such middle-school milestones as first dance, first kiss, etc., and Lilah’s pitch-perfect tween narration make this good-natured dramedy an easy sell to pre-adolescents, particularly those who have found the ghost story genre to be a bit too grave (ha) for their liking. – Kate Quealy-Gainer – Volume 66, Number 1, September 2012